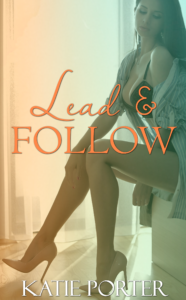 Lizzie Maynes’s torn ACL threatens more than her career as an international Latin ballroom champion. During her lengthy recovery, her longtime professional partner, Dima Turgenev, has been dancing at the Chelsea District’s most notorious burlesque, Club Devant. More than just dancing, he’s been experimenting with shocking new moves that make her want to pull him off stage and get back on tour as soon as possible—the better to keep their successful friendship safe.

Dima knows all about safety, and the lack thereof, because he blames himself for Lizzie’s injury. Far from the pressures of competition, Club Devant is the perfect creative venue to rebuild his rattled confidence. He’d love for Lizzie to join him and revel in the club’s intoxicating freedoms. By exploring the new sensual energy simmering between them, they could become more than friends.

Paul Reeves, a recently divorced Texan starting over in the Big Apple, is all for joining the dancers as they blaze through sexual boundaries. But he also knows their sizzling trio won’t last. Lizzie and Dima belong together. Before the last sparks fade, he plans to transform two stubborn friends into lasting lovers—one raunchy lesson at a time.

“Between the red-hot sex scenes, the author deftly explores the pit-falls and possible rewards of friends becoming lovers, leaving readers with the welcome message that life can hand out happy surprises even with things look grim.”
~ Publishers Weekly

“…Hot, hot, hot! The one-of-a-kind plot is accompanied by sizzling rendezvous, and their chemistry is orgasmic. Fans of erotica will be left breathless as they cha-cha straight into a cold shower.”
~ 4 Stars, RT BookReviews

For Dima, shutting down his emotions as he walked through the busy Club Devant was absolutely impossible. He had too much on the line. His muscles tensed, already pooling with lactic acid.

He didn’t know what he would find. He and Lizzie had always maintained a platonic front. Affairs outside of their partnership had silently become off-limit topics. Just…safer. Throughout two years spent with Svetlana Rodchenko, his most recent long-term relationship, Lizzie had managed to keep her distaste for the fellow ballroom dancer at bay. Dima had known her feelings, but he’d been grateful that she hadn’t pressed.

Since returning from her parents’ smothering brand of care, she’d become increasingly…demanding when it came to his attention. After he and Svetlana had parted ways, Lizzie began amping those demands to exciting, dangerous new extremes. Graphic descriptions of her last date, narrated with her cheeky, wicked smile, had burned into his brainpan—and fueled his jacking off for three weeks.

His hand was shaking as he reached for the doorknob of his dressing room. Sweat from the performance had dried, but a new sheen popped up on his forehead and across the back of his neck. He had an ominous feeling that whatever was behind that door was the start of…something.

The beginning of the end, or the end of a fresh beginning.

The flimsy particleboard door opened easily. A perfect triangle of yellow light poured from the corridor into the dressing room.

No matter what recklessness he’d believed Lizzie capable of, the truth was more extreme. He’d known it would be. That didn’t make the scene easier to process.

Lizzie straddled Paul in Dima’s chair, with her hands at the back of his head. They both froze mid-fuck.

He shut the door behind himself. His surprise made his voice more gravelly, his accent stronger. He hated that. She’d hear it and know, but maybe she wouldn’t hear the hurt underneath.

Lizzie blinked, her eyes unfocused. Her dyed-bright blonde hair was a feathery mess. A scrap of tiny black lace that used to be panties twisted around one of her four-inch heels. Paul’s jeans pooled around his thighs, showing off tanned, rock-hard legs beneath the swirl of Lizzie’s red dress.

Paul closed his hands over her back, almost protectively. “Hey, buddy, do you mind?”

She could’ve taken the man anywhere, screwed him anywhere. New York had thousands of motels and hotels. Or hell, there was always the alley behind the club.

Yet she’d brought Paul here, and she sure as hell wasn’t scrambling off the hard cowboy. In fact, under Dima’s gaze, her hips twitched. Her lips parted.

Feeling tight as piano wire, he crossed to where she sat with Paul still buried deep.

Fuck, Dima didn’t have a clue who he envied more. The sudden throb of his ready cock didn’t want to differentiate. It’d take either of them. Both. His conscious mind had dropped out somewhere along the way. Eventually he might feel terrible about all this. For now, his only thought was finally. Finally they weren’t stuck. They weren’t frozen in the limbo that had stolen the last half year.

Dima tugged her hair, gently but firmly. Her neck bowed in a graceful arch. He kissed her on the forehead.

“Privet, little one.” He locked eyes with Paul. Steady blue eyes looked back with a hint of challenge. “And hello to you too. I don’t mind. Continue fucking her in my dressing room. I’m sure she meant it that way.”

Lizzie’s soft gasp shot right through him. Just as hot as he’d imagined, even if it was another man giving her pleasure.

A decade and a half together, one way or the other, and he’d be damned if he could figure her out. At that moment, he sure as hell didn’t understand himself.

Turning away was gut-wrenching. He’d never turned his back on Lizzie when she so desperately wanted to be seen.

Only years of training forced his body to obey. He moved past them to the wardrobe in the corner.

The chair creaked behind him. Dima didn’t look. If Lizzie wanted his attention, she had it. If she wanted more than that, she’d need to ask for it. He’d be damned if he would guess anymore. They stood at the sharp blade of change, ready to slice through and cut him and Lizzie apart forever. He didn’t think he could survive that, but he sure as hell wasn’t going to last long in this nowhere land.

He snatched the first set of clothes he found, to replace the sleeveless shirt he’d worn for the second half of his performance. Inside, a roiling swarm of energy buzzed. He always came off the stage popping, especially of late when he became so tense with the effort of protecting lesser partners.

This was more than he’d ever experienced.

The chair creaked again. Dima kicked out of his trousers.

Lizzie gave a little sigh that squeaked upwards to a moan. “Mmm, Dima… You’re good to me, aren’t you?”

Paul cleared his throat. “Look, I don’t know what kind of freak show you two have going, but I’m not sticking around—”

Lizzie’s crystalline giggle overrode whatever he’d been about to say. “It’s a little difficult to lie when your dick’s inside me.” She dropped her voice to a faux whisper. “You’re even harder than you were before.”

Dima shoved a washcloth under water. Cold, of course. Running it over his skin did nothing to cool him off. His blood still slammed a fandango.

Was he really standing for this? Yes. More than that, some small part of him was loving it. The pure wickedness of the situation made his cock ache. While he always planned and strategized, Lizzie tossed wrenches with the best of ’em.

Shifting to the left brought him in line with a mirror. From there he found a perfect, unobstructed view of Lizzie riding Paul. She’d lowered her forehead to his. Her hips worked over him. Big, calloused hands curled around her hips.

Paul glanced at Dima before planting his cowboy boots wide. He fucked up into Lizzie.

Dima jerked his gaze down to the washcloth in his hand as his nerves shot higher. That nod to privacy was ridiculous. Watching didn’t mean interrupting, not when they were in his damned dressing room. He found her face in the mirror and didn’t look away.

The pair had pressed their cheeks together, staring at Dima’s back. They were stroking with tiny movements that appeared no less powerful for it. She wrapped her forearms around Paul’s neck and crossed her wrists. “Lovely, isn’t he?”

Paul didn’t answer with words, but he grunted. His ass came up off the chair. Lizzie gasped again, this time louder.

Thank God music from the club pumped through the air, this time a jerky, techno-flavored remix of some ’80s song. Only Dima and Paul would be lucky enough to hear her sweet noises.

She licked her lips, visibly trying to put on a front—as if she weren’t having sex as she chatted. “It’s all those hours of dancing. Dima’s a stickler for practice. I thought we’d wear ruts in the floor.” The perfect line up the side of her calf dug deep as she pointed her toes and hooked her feet over Paul’s knees. For leverage apparently, because she arced back. Her breasts rose, perky and full. “It’s given him an amazing body. Those shoulders. That gorgeous back.”

Paul spread his fingers wide over Lizzie’s ass. If it weren’t for the silky red material of her dress, his fingertips would be digging into the delicate skin between her globes. “How many times?” His voice had gone deeper and huskier, edged with something harsh.

Dima swallowed past the tightness in his chest and flicked the washcloth into the sink. He raked his fingers through his hair, but even pulling didn’t alleviate the noise in his head. His greed wasn’t going anywhere. His hands. On Lizzie. Her lush body, her mouth, her smile. He’d believed he would possess all of those beautiful things eventually, if he were patient enough.

Maybe not. Yet…this was all bloody surreal.

“How many times what?” She twisted her hips in the same move she used when dancing the rumba.

“How many times have you two slept together?” Paul asked on a groan.

She laughed, but the sound was rough. “Only once. A long time ago. It wasn’t that great.”

Paul watched Dima in the mirror, his face flushed beneath his sunshine tan, but Dima was tired of being used as some sideline attraction. He bent over to push his legs into a pair of workout pants.

“That ass makes me think I should reconsider,” Lizzie said, her words a taunt. “What do you think, Paul? Should I give him another chance?”