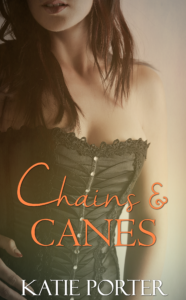 A Dom double-teamed by two submissives? He doesn’t stand a chance.

Wealthy businessman Daniel Baker doesn’t have a creative bone in his body, but he knows art and craves beauty. Contemporary dancer Naya Ortiz, his fiancée of three years, embodies both. His protective commitment to her happiness extends to hiring Dominas to satisfy the sexual masochism she craves.

The balance of their relationship is tipped when Naya dances with reckless Cajun choreographer Remy Lomand. His magnetism as a Dom carries over to a backstage encounter that leaves Naya breathless—and Daniel unable to look away.

When Remy and Naya tirelessly work to found a professional dance company, Daniel is left on the outside looking in. And although he and Naya are ready to submit to Remy for the rest of their lives, the man they call Sir may not want their love at all.

This book pairs with Lead and Follow, but is a stand alone.

“The duo behind Porter has such a way with words. This installment in the ‘Club Devant’ series is tantalizing, racy and absolutely flawless.” ~ RT BookReviews 4½ Stars Top Pick

Naya Ortiz had danced with countless male partners since she’d turned fourteen, the year a boy from the Ukraine enrolled in her great aunt’s dance studio in South Brooklyn. He’d certainly learned to lift. Sometimes she’d teased him that he was their own version of Coney Island’s Cyclone. Twenty girls waited in line for their turn to get thrown skyward and spun in circles.

She felt that way now. Remy Lomand’s audition choreography hadn’t included any lifts, but he might as well have dropped her into a death spiral.

He held her hand as he led her stage left. In the dark behind the thick scarlet curtains, he pushed her against the nearest wall, front to front, as if they were still on stage.

“We’re not dancing anymore,” she said, hands on his shoulders. “You have other girls waiting.”

“Don’t want no other girls.”

Naya couldn’t hide a shudder that scared the holy hell out of her. She was engaged. Daniel was somewhere in the club right that moment. If he had any idea how that dance had affected her…He was a generous man. Powerful and patient and so fucking sexy. Sure, they’d tested limits. Once they’d even included another man.

That guy had wasted two hours trying to turn her on. Remy Lomand had needed less than two minutes. Jesús Cristo. Again she was thinking of rollercoasters and rides she didn’t want to end.

“I’m sure you have other dancers to audition.” She had endurance like an Olympic swimmer. After all, Broadway demanded resilience. But her words were breathy and out of step with her thoughts.

Remy’s hands had slid to her hips as if they belonged there, even after the music stopped. “Auditions are over, girl. What’s your name again?”

“Well, Mademoiselle Ortiz, you just embarrassed the competition and made me the envy of every poor shit here.” He grinned. They were concealed in shadows, but that flash of white teeth was unmistakable. “That might include some of the gay boys.”

He pushed her hair back from her neck. His soft exhales dove down inside of her. Rather than feathering across her skin, the feeling was deep and concentrated. He kissed her where goose bumps tickled her throat. She could feel his smile. “I take what I can get, darlin’. Right now, that’s you.”

He jerked back as if she’d decided to reenact the improvised slap from their dance.

“Way to make a girl feel special,” she said, still with a playful smile. “You deserve every bit of the annoyance on your face.” She ducked under his arm. “If I’m hired, I want to hear it from Mr. Shaw.”

She was walking away, smiling, feeling bright as a soap bubble in the sunshine, when he caught her around the waist. Spun. Pressed flush. This time he didn’t work with slow brushes of lips against skin. He caught two tangled handfuls of hair and twisted.

That was the most coherent thought she could manage when he began to push her, slowly, with firm intent, toward the floor. Her loose, damp hair became his tool as her knees folded under the rush of submission. She sank into the sensation of it, the rightness, as rational thought was replaced by almost joyous excitement. Dimly she registered the press of hardwood against her kneecaps, but most of her senses—most of her world—focused on the intent way Remy Lomand stared down at her.

She’d barely had the chance to look at him before her audition. Just a general assessment: great arms, sloppy dresser, fuck-worthy Cajun accent. The shadowy backstage accentuated the hollows beneath his cheekbones, his lower lip, and the graceful sweep of his brows, one of which was pierced by a silver bar. A swatch of bright light caught the line of his jaw where bristling stubble was a shade lighter than his brown hair.

“When it comes to which dancers to hire, he does what I tell him. I’m through with girls who won’t listen.” That slippery-smooth accent was like hot honey. It should’ve been sweet and slow, but Naya burned with every syllable. “You’d listen, chere.” He tightened his grip on her hair, even giving her head a little shake. “Wouldn’t you?”

After another fierce tug, he laid one hand flat against her cheek. “And if you didn’t listen, my slap would land right there.”